Start a Wiki
Ariel is the 4th official Disney Princess.

Ariel was originally a mermaid who longed to see more of the human world, other than the various items and trinkets that would fall into the sea. After she met Prince Eric she was soon transformed into a human, where she remains to this day. She has two best friends who come from the sea, Flounder the fish, and Sebastian the crab.

Ariel is a fair-skinned girl with bright blue eyes and bright red, slightly curled hair. She has pink lips and wears a silver tiara with blue accents. She wears a glittering, cyan semi-pleat dress with pale mint frilly petticoat beneath it. Around her waist is a very pale glittering skirt layer to match the sleeves worn over each arm. She wears shell earrings to match the accessory sewn to the center of her chest.

When she was younger, Ariel had less curled hair. She was shown in a short pale green and sky blue dress with white frilly tulle around the waist and sleeves. Bows accent the center of the skirt, while a purple flower was sewn to the middle of the tulle layer. She wore matching flats with a single bow on each toe. Her crown matches the tiara her older form wears.

Ariel is a bright and spirited young girl full of curiosity. She is adventurous but stubborn, and this sometimes gets her into trouble or gets the better of her. While impulsive, she tries not to let it block her judgement and she is shown to hesitate or get extremely reluctant if at any time she knows something may be morally wrong.

To reach her goals and dreams, Ariel has no problem choosing to risk everything in order to get it. Even if it may hurt her in the end or cause problems. She is highly protective over those she cares about and has no problem risking her own safety; with her energetic and courageous personality she will never shy away from an obstacle. Her bravery and kindness for others makes her very forgiving. She tries to remain hopeful, even when her belief is shaken or questioned.

Like her father, Ariel has been shown to have a bad temper when provoked. She also has some self-doubt in herself, and at one point wondered if she truly had been a freak for having any fascination for humanity. While everyone else seemed to fear it, she questioned it and longed to know more. Despite her usual naivety and impulsiveness, Ariel has shown on many occasions to be serious, careful, and very intelligent and intuitive.

As she grows, she has shown to mature. This is best seen in The Little Mermaid II: Return to the Sea, when she has become a mother. Due to the threat of Morgana, she becomes very overprotective of Melody in the same manner she was treated by Triton in the first film. She is shown to long for the sea, but keeps this hidden from Melody for the latter's own safety; even though it would've been easier if she had explained everything to her, and points this out eventually.

While she is a Mermaid, Ariel has a few abilities. 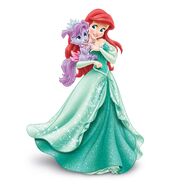 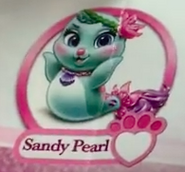 Ariel's Puffin, Waddles
Add a photo to this gallery
Retrieved from "https://disneyprincesspalace-pets.fandom.com/wiki/Ariel?oldid=14543"
Community content is available under CC-BY-SA unless otherwise noted.