Start a Wiki
She is the 3rd official Disney Princess.

A hopeless romantic who was cursed to sleep for many years when she was born. She had been saved by Prince Phillip, who battled the evil witch and woke her from this spell. She is protected by three fairies who seem to bicker a fair amount of time - due to their clashing personalities.

Aurora is a fair-skinned Princess often noted for her beauty. She has pink lips and lavender eyes, along with long, curly golden hair adorned with a simple gold tiara. She wears a flowing pink dress composed of a glittering top lined with a white piece of material around the top, revealing her shoulders and upper chest. The sleeves attached to it, along with the material around the waist is pale pink. Her skirt is light pink with white floral designs and glitter all over it, while at each corner she has a pink glittering material sewn in place. Beneath her skirt is a frilly, very pale pink petticoat.

As shown in a picture, when she was younger she has the same curled hair and wore lighter makeup. On her head was a silver tiara with pink gems in it. The dress worn is reminiscent of the gown she is normally depicted in, but with a shorter skirt composed of pleats and no glitter. Her shoes are fuchsia flats.

Kind and elegant, Aurora is a classic sophisticated princess. At first she is naive for the outside world, and due to being sheltered for most of her life, she is highly carefree. She is loyal to her "aunts" and usually shows them respect, but sometimes she may disagree with them. Since she was raised not to talk to strangers, Aurora was naturally startled and apprehensive when the handsome Prince Phillip appeared in the forest. However, she was drawn to him before remembering her aunts' rule about not talking to strangers. Aurora then compromised in agreeing to talk to him by arranging to meet him at her cottage, under the supervision of her aunts.

In later media, she is shown to have matured and become more self-assured, proactive, independent and confident in her opinions and abilities. 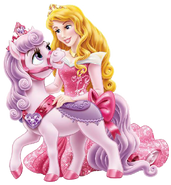 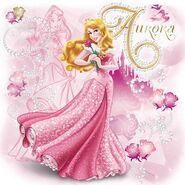 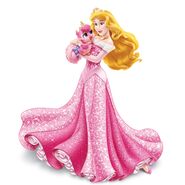 Ash, Aurora's Baby Dragon
Add a photo to this gallery
Retrieved from "https://disneyprincesspalace-pets.fandom.com/wiki/Aurora?oldid=12058"
Community content is available under CC-BY-SA unless otherwise noted.