Belle has gained a significant amount of intelligence over the years due to her love of books, providing her with an amazing vocabulary, active imagination, and an open mind. She is very confident and outspoken in her opinions, and seldom likes being told what to do. Despite all this, she does not have very many friends due to her smarts and being a free thinker. Unlike most characters in the film, Belle isn't concerned about hers or other's appearances, and is able to look past how people appear and into their hearts. This is how Belle managed to break the Beast's enchantment, and restore love and laughter to the castle. Belle's personality transforms throughout the film. At first, she frequently dreams about a life of adventure and romance, not realizing that sometimes adventures might take a turn for the worst. As Belle begins to spend more time with the Beast, and their relationship blossoms into a strong friendship, she begins to fall in love with him without realizing it. As she matures during the course of her imprisonment, her love for the Beast breaks the enchantment. Belle realizes that having dreams is great, but sometimes you need to look beyond them and find what you're truly looking for.

Most of Belle's abilities are based on knowledge and intelligence instead of physical strength.

One of Belle's more obvious abilities is her use of vocabulary. Possibly due to her love of books and constant reading, Belle is able to call out many words (such as "primeval" or "provincial") off the top of her head and use them in the correct context in order to prove a point or state a fact. She also is apparently a speed-reader, having managed to complete a book in a short amount of time, which apparently shocked the bookkeeper when she came to return the book.

Although Belle is quite ignorant of her own beauty, she does somewhat manage to use her feminine charm to her advantage. When Gaston proposed to Belle, she pretended to be clueless and at a loss for words; however, she was secretly leading Gaston toward the door, and, when cornered against it, she opened it and sent him flying into a mud pond, taking some amusement upon doing so before throwing his boots out after him.

Belle is also quite adventurous and fearless, as she entered the castle without hesitation when looking for her father. And despite being initially horrified by the gargoyles and decor of the castle while being led to her room by the Beast, Belle was curious enough to check out the forbidden West Wing where even the grotesque statues and wrecked furniture did not deter her as she wanted to find out what the Beast was hiding.

Belle's movements maintain an air of elegance. This was at the bequest of the story writers and producers of Beauty and the Beast, where they studied the movements of ballerinas during the course of Belle's development. Like ballerinas, Belle walks diligently and swiftly on her toes no matter what types of shoes she is wearing or where she is located. She can subconsciously navigate her way through a crowded street while reading, without colliding with any other people or objects (although having several near-misses), at one point even deflecting water that was about to pour on top of her while she was reading without once looking up.

Belle displays a few notable athletic abilities despite having spent her life in the village. She is able to ride her horse Philippe at quite stunning speeds with ease and skill, such as in the Black Forest when she managed to outrun the wolves for a time and even causing one wolf to veer into a tree. Despite her slim figure, Belle seems to have considerable strength. She may have lifted the Beast, as evidenced by the Beast being placed onto Philippe's back, although this was never shown on-screen. Later on, she was able to pull the Beast up onto a balcony. In addition, she also was revealed to have rescued her father from the elements and presumably place him onto Phillipe while he was still unconscious. Both the Beast and Maurice are each presumed to weight considerably more than Belle, making her rescue of them quite a feat. Belle also appears to have tireless reserves of stamina and considerable resilience to cold likely due to her young age, able to survive fording icy water for a short period of time (in Enchanted Christmas she proved to be a capable swimmer when she rescued Chip), and she is able to walk back to the castle having given her cloak and Philippe over to the injured Beast after the wolves were driven off.

Belle has long brown hair, most often tied back in a low ponytail with a blue ribbon, and possesses captivating hazel eyes, full lips, rosy cheeks, a heart-shaped face, and a sculpted figure. One of her more distinct features are the strands of hair that are constantly slipping loose from her ponytail and falling in front of her face - she is often seen brushing them back into place when nervous or trying to be polite. 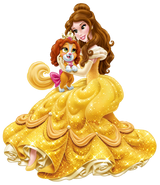 Lacy, Belle's new poodle
Add a photo to this gallery
Retrieved from "https://disneyprincesspalace-pets.fandom.com/wiki/Belle?oldid=13579"
Community content is available under CC-BY-SA unless otherwise noted.