A lilac bird with pink tipped feathery wings. Her tail is composed of light purple feathers and pink feathers. She has a fluffy, light purple curled hairstyle with most of it sticking up, worn with a pale green crown with a pink design in the middle. She has brown eyes and pale orange feet and beak. She wears a pale green ribbon around her neck and tail.

She loves to sing and is very musical 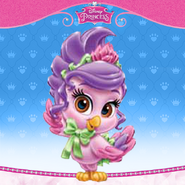 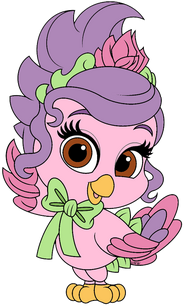 Clipart of Birdadette
Add a photo to this gallery
Retrieved from "https://disneyprincesspalace-pets.fandom.com/wiki/Birdadette?oldid=14526"
Community content is available under CC-BY-SA unless otherwise noted.