Brie is a pet mouse who belongs to Cinderella. One cold night the stableman had just gone home and Cinderella started to worry about the horses. She rushed to the stables to find they were in good condition; to her surprise, a tiny and gentle mouse was taking care of them. As thanks, she presented Brie with a piece of cheese and since then, they have become fast friends.

Brie is a pale blue mouse with a fluffy, thick tail and a single clump of pale pink bangs. She has a white muzzle and chest. Her eyes are bright blue, while her tiny button nose is pale pink and her inner ears are light red. She wears a silver tiara accented with blue gems, a bright yellow bow on her tail, and a pearl collar with a yellow emblem.

A one of a kind mouse who loves to play and take care of her bigger friends, the horses. She knows a lot about them and is very loyal, which greatly impressed Cinderella after finding out she has lived there for so long. She loves to keep the horses company in the stables, and being helpful. 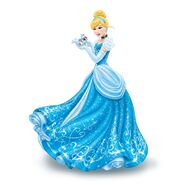 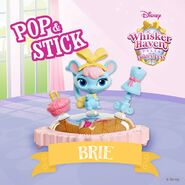 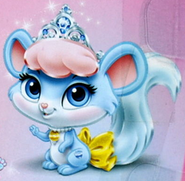 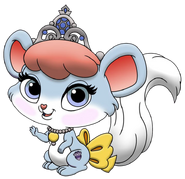 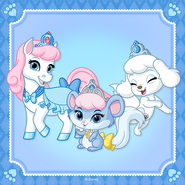 Add a photo to this gallery
Retrieved from "https://disneyprincesspalace-pets.fandom.com/wiki/Brie?oldid=14486"
Community content is available under CC-BY-SA unless otherwise noted.