Start a Wiki
Cinderella is one of the disney Princesses that appears in the Palace Pet series. Appearing in the 1950s, Cinderella was the oldest Princess introduced at the age of nineteen. But with the addition of Elsa, from Frozen, she will become the second oldest.

Cinderella was the second Disney Princess introduced. She is voiced by Jennifer Hale.

A headstrong and independent young woman, Cinderella tries very hard to not let her sorrows get the better of her. She remains focused and mature and is always kind to others, even those who may have wronged her in the past; best demonstrated with one of her step-sisters, who she managed to help turn over a new leaf and befriend, as well as find love and get her own happy ending.

Every now and then Cinderella can be a little sarcastic, but it is usually only in private and only when it comes to the truly nasty. She is normally calm and patient, but she can be a little hostile if the person deserves it. She also has her rare, clumsy moments.

Cinderella is very knowledgeable and clever, something that is surprising given her poor upbringing. She has become very resourceful in her years and is quick to think up ideas in times of need. She was also idealistic and while she did have her dreams, she worked hard every day instead of wasting the time doing nothing.

Cinderella likes animals, dancing, dreams, and her fairy godmothers magic. But she dislikes being mistreated, when her stepmothers cat causes trouble, and the way the castle was run before she changed it and made everyone lighten up.

Because she did a lot of the housework growing up, Cinderella has many natural home-making skills. Like cleaning and perhaps cooking or baking. She loves to sew and make things, implying an artistic nature.

Cinderella is a fair-skinned young woman with bright blonde hair pulled into a fancy bun, worn with a few loose curled strands. She wears simple, pale blue pearl earrings and a shiny blue headband. Her lipstick is fuchsia, while her eyes are bright blue. Around her neck is a plain black choker.

Cinderella is normally depicted in a fancy, sparkling blue dress accented with pale blue and white. With it, she wears her iconic glass slippers.

Cinderella's father married the woman who would become her stepmother. After his death, shortly after the marriage, Cinderella was forced into the maid work around the home. She suffered at the hands of her cruel stepmother and sisters and thought it would never end. But one day, she found out there would be a ball. She knew she had to attend it but in secrecy, due to her stepmothers refusal.

When they found out that she would be going, her sisters destroyed the dress, thinking it would keep her from going. It was then Cinderella discovered she had a fairy god mother, who transformed the ugly remains of her ruined dress into what would become her iconic dress now. She danced with the prince, then fled when midnight came along and soon after, the prince came in search of her. When he found Cinderella, he whisked her away and they were soon wed. 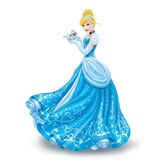 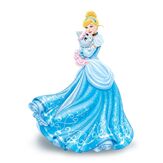 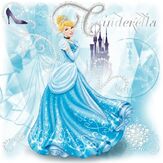 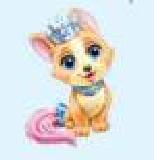 La Grande, Cinderella's Corgi Puppy
Add a photo to this gallery
Retrieved from "https://disneyprincesspalace-pets.fandom.com/wiki/Cinderella?oldid=14200"
Community content is available under CC-BY-SA unless otherwise noted.