Cubbie is a bear cub to belongs to Rapunzel. Rapunzel was painting a portrait of Daisy when she realized that her yellow paint was missing. She followed the trail and found Cubbie who thought the paint was honey.

A purple bear with pale purple inner-ear, tummy, and paw pads. He has large green eyes and a mauve nose. On the top of his head is a tuft of plum-colored hair. Cubbie wears two flowers on his head, one of gold, one mauve, with a crown-like accessory. Along with a mauve ribbon on his puffy tail, and a gold collar. 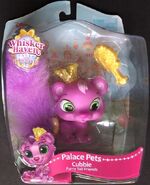 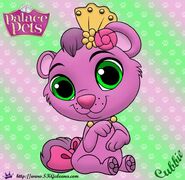 Clipart of Cubbie
Add a photo to this gallery
Retrieved from "https://disneyprincesspalace-pets.fandom.com/wiki/Cubbie?oldid=14516"
Community content is available under CC-BY-SA unless otherwise noted.