Madame Hamilot is a female hamster to belongs to Snow White. Berry was berry hunting when she found Madame Hamilot in the bushes snacking on the strawberries. So Berry brought her home to Snow White where she could snack on lots of delicious treats.

A gold fur hamster with lighter coloring in the middle of her head, torso, and paws. She has a dark pink nose and pink inner-ear to match her blushed cheeks. Her big eyes are brown. She has a fluffy tail held by a shiny red ribbon.

Madame Hamilot also wears a gold bow with a ruby heart in the middle, and a navy cape around her shoulders.

She loves to eat berries. 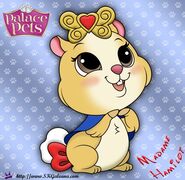