Matey is a young border collie puppy befriended by Ariel after she saved him from the ocean waters when he jumped from a boat that had began to drift away from the dock she happened to be waiting by. Ariel currently tries to teach him to swim.

Matey's theme colors consists of purple and pink. His dark purple pawprint mark is on his right hip.

He is voiced by Ashleigh Ball.

Matey is a pale lilac collie with a white muzzle and tummy. His eyes are a deep shade of blue and his nose is light pink. He has a small amount of bangs, which like his ears and tail, are lavender colored. He wears a simple silver crown with emerald gem in the center, a pink leafy tail ornament, and a pink collar with a shell attached to the center and pearl studs. 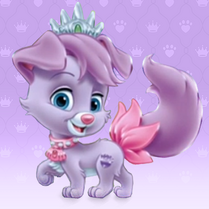 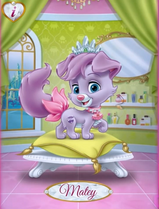 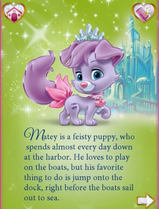 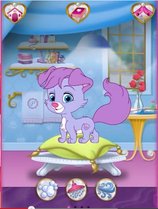 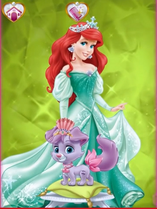 Add a photo to this gallery
Retrieved from "https://disneyprincesspalace-pets.fandom.com/wiki/Matey?oldid=5223"
Community content is available under CC-BY-SA unless otherwise noted.