Nuzzles is a shy little fox given to Aurora after the fairies saw how homesick she had become.

A fox pup with her upper head a dull, pale orange. Her inner-ear, eye marks, and body are a pale gold color, while the fur around her chest and muzzle are a paler color. She has a light brown nose and light purple eyes. She has a single thick curl at the center of her head and a big puffy pale pink tail.  She wears a giant hot pink sequined bow on her tail, a gold tiara with two small magenta gems and a giant heart gem in the center, and a pale pink pearl necklace with a pink gem medallion attached to it with a crown in the center.

Nuzzles is a very shy fox who cannot tolerate or stand loud sounds or noises. She has the ability and charm to make everyone feel happy and is very pleasant and content. 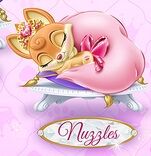 Nuzzles in the App 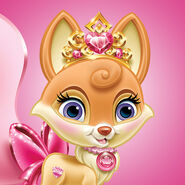 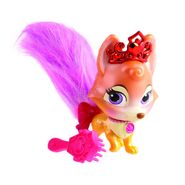 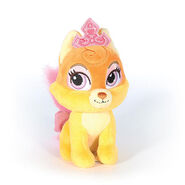 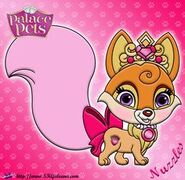 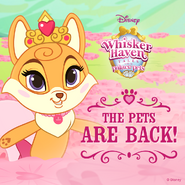 Nuzzles in Whisker Haven
Community content is available under CC-BY-SA unless otherwise noted.