Otto is a sea otter who belongs to Ariel. He was singing along with Ariel when she was on Eric's ship.

A light cyan otter with large, dark blue eyes and a tan muzzle to match hs inner-ear and chest. He has a big brown nose. His white and black hat has a red design on the corner to match the red and white ribbon on his tail and the collar he wears.

He loves to sing. 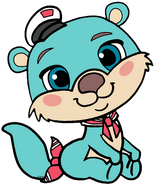 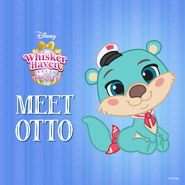 Add a photo to this gallery
Retrieved from "https://disneyprincesspalace-pets.fandom.com/wiki/Otto?oldid=14499"
Community content is available under CC-BY-SA unless otherwise noted.