River is a wolf pup for Pocahontas. River was howling at the moon, feeling so sad and lonely, until Pocahontas found her and invited her to camp.

A dull grey-blue wolf with paler colored fur on her face and inner-torso. Her large, almond brown eyes are accented with feminine lashes, pale pink blush and a matching nose and inner-ear. She wears a gold tiara with multiple gems, including a pink diamond attached to a large feather to match the glittering leafy tail ornament and paw marking. She wears a feathery gold collar. Her curled tail is teal.

She hates being alone. 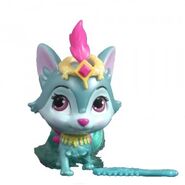 River in Whisker Haven
Community content is available under CC-BY-SA unless otherwise noted.