Slipper is a plump kitty owned by Cinderella. She has a special talent that involves finding shiny, pretty objects that the Princess uses to make jewelry with.

She has a blue and pale pink color scheme, and her blue heart-pawprint mark is on her right thigh.

Slipper is a pale blue-white, fluffy cat that happens to be just a smidge overweight or have thick fur. She has bright, sky blue eyes and a pale pink nose to match her cheeks, while her muzzle and chest fur is white. She has light pink coloring in her ears. Her bangs are short cut and a pale, frosted pink to match her curly tail held by a bright blue ribbon. She also wears a big silver crown with sapphire gem in the center, and a thin necklace with a blue sphere depicting Cinderella's glass slipper. 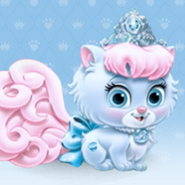 Add a photo to this gallery
Retrieved from "https://disneyprincesspalace-pets.fandom.com/wiki/Slipper?oldid=4689"
Community content is available under CC-BY-SA unless otherwise noted.