Snowpaws is Mulan's pet snow leopard. She met Mulan after spotting the snow sculpture she made as she hid behind it.

A white snow leopard with green eyes and dark purple eyebrows. Her nose is pale pink, while her tail is pink to match her inner-ear. Her paw mark is turquoise to match the spots on her lower body and head.

She wears a light purple crown adorned with gold and violet gems, along with two gold sticks with pearls on top and two small fuchsia tassels. She wears a hot pink scarf with a fuchsia fringed tassel hanging from a large pearl, while a glittery blue ribbon is tied to her tail.

A crafty snow leopard with a talent for making things. 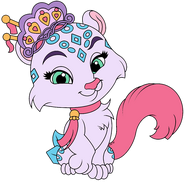 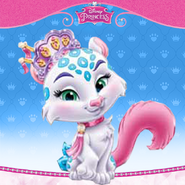 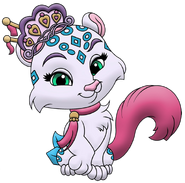 Snowpaws in Whisker Haven
Add a photo to this gallery
Retrieved from "https://disneyprincesspalace-pets.fandom.com/wiki/Snowpaws?oldid=14490"
Community content is available under CC-BY-SA unless otherwise noted.