Start a Wiki
Sultan is a slow but steady tiger that belongs to Jasmine. Who found him when she was out in the market. He had been resting on a pile of precious silks.

His theme colors are orange and blue. His blue heart-paw print is located on his left hip/upper leg.

Sultan is voiced by Andrew Francis.

Sultan is known for his loyalty and bravery. Often he spends his time picking out jewels with Jasmine.

Sultan is an orange and brown striped tiger cub with a white chin, furry chest, and paws. His eyes are a mixture of yellow and orange, while his nose and inner ear coloring is pink. He has loose, creamy-orange fur at his cheeks.

Sultan wears very few accessories, consisting of a teal head band with a big blue orb-gem in the middle and a light blue feather attached. As well as a shimmery teal bow on his tail. 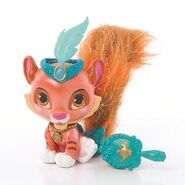 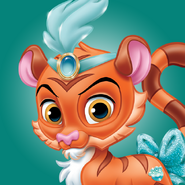 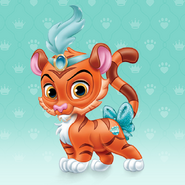 Add a photo to this gallery
Retrieved from "https://disneyprincesspalace-pets.fandom.com/wiki/Sultan?oldid=5214"
Community content is available under CC-BY-SA unless otherwise noted.