Sundrop is a cute peacock owned by Rapunzel. Sundrop met Rapunzel when he saw her painting in the village square and he couldn't help taking a closer look. Rapunzel was amazed by his unique personality and they became good friends.

His color scheme is gold, sea green and pink, and he has a sea-green heart paw print mark on his right hip.

Sundrop is voiced by Stuart Stone.

He's a showman and loves to get compliments. He loves to make classy, unique suggestions for Rapunzel's artwork.

Sundrop is a light pink peacock with bright, olive-green eyes. His beak and feet are yellow. He does not have any hair, but he has giant rainbow tail feathers of blue, yellow, and pale pink. Dark pink lines the feathers, while each portion has a big teal, gold, and mauve design on it. Sundrop wears a gold crown with three giant crystals shaped like diamonds. Next to it are two flowers, one yellow, the second a cloudy-blue. He wears a hot pink ribbon at his tail feathers and has a yellow beaded collar with a flowered shape. 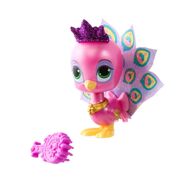 More of Sundrop's Story and Personality 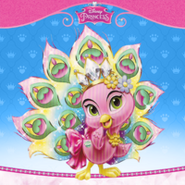 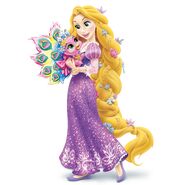 Clipart of Sundrop
Add a photo to this gallery
Retrieved from "https://disneyprincesspalace-pets.fandom.com/wiki/Sundrop?oldid=8035"
Community content is available under CC-BY-SA unless otherwise noted.