Thistleblossom is Snow White's pet hedgehog. She was discovered by Snow White while she made her way home one winter's day, just as she was beginning her hibernation. She was awoken by the warmth of the room Snow White brought her to, and immediately ran to the window to observe the snowflakes outside.

Thistleblossom is a pale blue hedgehog with a slightly darker, thick tail of quils to match her blue hair quills. She has warm brown eyes and pale pink blushed cheeks to match her light pink nose and inner-ear. Her muzzle and inner-torso is white, and on her right hip is a red paw mark.

She wears a yellow bow on her tail and a large glittery red bow with yellow accessory at the center on her head. Her collar is made of pearls with a red accessory.

A smart and sweet disposition hidden by a prickly appearance; she loves to play with the crunchy leaves in Fall, and roll down the hills in a ball during Spring and Summer. She adores Winter the most though, and filled with delight when she was finally able to stay awake and observe the snowy scenery she dreamed of seeing for so long. 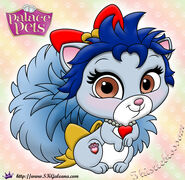 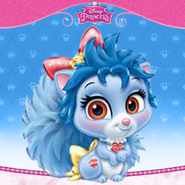 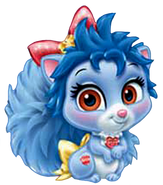 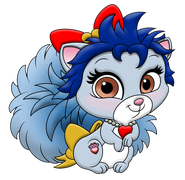 Pop & Stick Mini: Thistleblossom
Add a photo to this gallery
Retrieved from "https://disneyprincesspalace-pets.fandom.com/wiki/Thistleblossom?oldid=14583"
Community content is available under CC-BY-SA unless otherwise noted.