Windflower is a young raccoon that belongs to Pocahontas, who found her stuck in a log.

A pale blue raccoon with bright blue ears, nose, eye marks, tail stripes, lower arm and paw, and feet. She has rich chocolate eyes and a white muzzle, eye mark, chest, and stomach. Her fluffy tail is held with a glittering gold leafy ornament. Her gold paw mark is mid-leg.

Windflower wears a pale gold head piece with a big crystal diamond in the middle. Three feathers are attached, one lavender, one pale pink, and the last pale blue. A pale orange shawl with pale gold material is wrapped around her shoulders, worn with a blue necklace with an ornament hanging from it.

Windflower loves to play and explore but she often gets into trouble. To get out of it, she usually relies on her big, adorable eyes. While loved by all, the adults usually use her tales as "lesson stories" for children.

She loves to play in waterfalls, eating, children, and looking nice for Pocahontas. 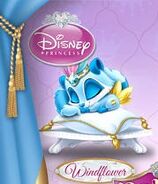 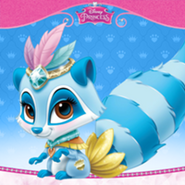 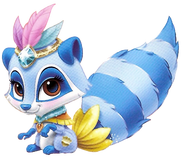 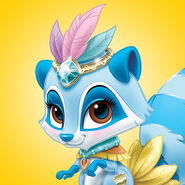 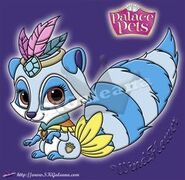 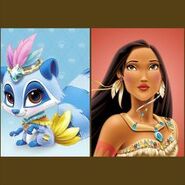 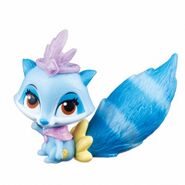 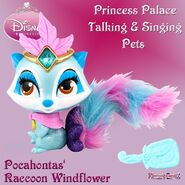 Add a photo to this gallery
Retrieved from "https://disneyprincesspalace-pets.fandom.com/wiki/Windflower?oldid=14036"
Community content is available under CC-BY-SA unless otherwise noted.